Master of Orion III (MoO3, MoOIII) is the third computer game in the Master of Orion series. MoO3 was developed by Quicksilver Software and published by Infogrames in February 25, 2003.

It is notable for its remarkably open development, whereby fans could vote on certain features and offer suggestions to designers, themselves mostly fans of the first two games.

Master of Orion III is a turn-based strategy game with the goal of rulership of the galaxy. During each turn, the player makes all the decisions that will be performed during that turn, including exploration, colonization, diplomacy, trade, voting in the Senate, technological research, espionage, and the design, construction, and combat deployment of their space fleet. The player can leave most of those decisions (apart from spy production and ship design) for his/her planetary governors to handle as they see fit, or can make changes here and there as he/she sees fit.

The automatic player AI does make many mistakes when building DEAs on a planet (buildings) as the AI will place a research DEA on a region where it would be completely useless as opposed to a mining DEA, etc. 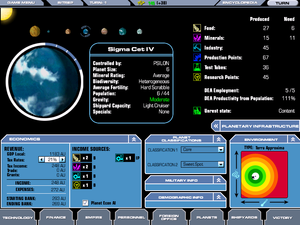 The main planetary control screen of Master of Orion 3. Note the six submenus and the possibility of AI control.

The goal of Master of Orion III is to win control of the galaxy through one or more predetermined means. The winning conditions, set at the beginning of the game, can be domination of the galaxy, leadership of the Senate, and/or discovery of the five Antaran X’s. The easiest to achieve is leadership of the Senate where the periodic vote for leadership is based on the power of each voting member. When the game begins the New Orions’ power level is one hundred times higher than any other race and they dominate all Senate votes. Through simply colonizing as many worlds as possible in the early stages of the game, and then developing and defending them, it is easy for the player to quickly develop a voting power level that exceeds all of the other races combined. At that point merely voting for your own race to be President of the Senate will result in victory. The victory method with moderate difficulty is the discovery of the five Antaran X’s through exploration and sending out of special high-priced exploration fleets. The most difficult method is galactic domination where you must completely subjugate all other races in the galaxy including the New Orions. This requires the military conquest of all worlds controlled by the other races and can take thousands of turns to fully complete in the largest, densest galaxies.

Colonization is of individual planets located in the numerous star systems randomly generated at the beginning of each game. Each star system will have from one to eight planets and each planet is rated on a scale of habitability related to your race’s physical requirements. Red 2 and Red 1 planets are the least habitable to your species, with Yellow 2 and 1 and Green 1 and 2 designating increasingly friendly environments up to Paradise, which is a planet perfectly suited to your race. The factors that can affect the habitability include temperature, toxicity, atmospheric density and composition, and gravity level. The various races of the game each have preferred planet types, from terrestrial races preferring the variations of the Earth/Mars-type terrestrial worlds, to the etherian races that prefer Jupiter-type gas giants. Worlds of any type can be colonized, however, as technological advancements will allow the terraforming of worlds to suit your race’s requirements, with the most hostile planets requiring more initial settlers and the population’s growth rate being greatly reduced. Planets are discovered through exploration and trade. By sending a starship to a given system the player discovers the basic information on and an assessment of the habitability of each planet in that system. Extras such as pre-spaceflight magnate civilizations, stranded leaders, rare resources, and other unusual and unique attributes can add additional bonuses or penalties to each world. Information on star systems and their worlds can also be gained though trade negotiations with the other races resulting in an exchange of intelligence.

In the Orion Senate, laws, treaties, and resolutions are voted upon and periodically the President is chosen. Declarations of war and peace, alliances, trade relationships, technological trade and outright blackmail are performed in the Senate. Votes are also periodically proposed on various laws that will be binding to all races in the galaxy (although you can opt out for a small penalty in race relations). These can be rules of war, labor laws, taxes, and other regulations.

The key to success over the other races is through technological development where knowledge in six fields of research can be advanced. The six fields are Biological Sciences, Economics, Energy, Mathematics, Physical Sciences and Social Sciences. Development in these fields will result in advancements in technology that can benefit all other aspects of gameplay, from the ability to terraform your worlds to better suit your race, to larger and more powerful space fleets, to better equipped ground troops, to stronger economic development tools and more capable spies.

Espionage is broken into espionage and counter-espionage through the recruitment of spies. Spies can be recruited with the specialties of Social, Political, Diplomatic, Scientific, Economic, or Military. Recruited but not deployed these spies will assist in counter-espionage activities in their area of specialty. Inserted into another race’s territory they will attempt hostile actions in their area of specialty. For example a Social spy inserted into another race’s territory will attempt to foment social unrest that will disrupt production on one or more planets, while a Military spy held in reserve will attempt to identify and thwart enemy spies attempting to sabotage your military infrastructure and space fleets. Inserted spies can be very effective in slowing the advance of an enemy and disrupting their plans, while enemy spies can create havoc in your own systems. It is wise to maintain a balance to ensure that each area is protected while focusing on inserting spies into your strongest opponent’s territory.

Combat in the game results when the space fleets of two or more races occupy the same star system. The combat progresses in two phases: Space combat and Ground combat.

Space combat is fought in open space or near one of the star system’s planets, which is determined by the attacker and defender at the beginning of combat. If the attacker’s goal is the conquest of a planet in the system then the space combat will be fought near a planet with that planet’s defenses included in the battle. If the attacker’s goal is merely the destruction of the enemy space fleet or occupation of the star system then the battle can be fought in open space between the fleets only.

The player can either manually control the fleet, which can be difficult due to the cumbersome and less than intuitive control system, or the AI can be allowed to take command of the fleet, which can result in losses due to the less than intelligent artificial intelligence – although the enemy’s AI is just as bad. The player is not even required to watch the battle, but can let the game decide the outcome and display the resulting winner and the number of remaining ships. If the attacker is victorious in space with the goal of conquering one of the system’s inhabited planets and brought ground troops with the fleet then the second phase of combat will follow.

Ground combat involves the confrontation of the attacker’s landing ground forces against any of the enemy’s ground forces that were previously assigned to that planet as well as a portion of the planet's population. Ground combat can be fought over multiple game turns and is concluded when the attacking forces are defeated or when the planet’s forces are defeated. As in space combat the player can control the attack by designating an overall plan or allow the AI to take command, and the battle can be watched or allowed to play out with only the final results reported. Victory means gaining control of the planet, its surviving population, and all surviving planetary improvements.

Unfortunately, player-controlled ground combat is largely determined by a number of factors beyond the player's control; for example, terrain, gravity at the battlefield (not necessarily the gravity displayed on the planet overview), and weather. While the army creation screens do display the preferred ambient conditions of each type of unit, the ground combat screen fails to display the battle conditions that will be affecting the battle until after its conclusion. Subsequent battles on the same planet do not necessarily have the same battle conditions, making any attempt to prepare for certain conditions with a specialized ground unit impossible. The overall battle plans available to the player (flank, trap, surprise, mass assault, etc.) are presented in the manual. The ground combat is essentially reduced to massively outnumbering your opponent.