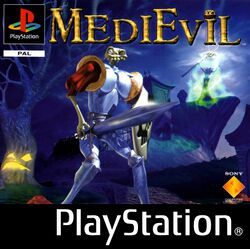 MediEvil is an action-adventure hack and slash video game developed by SCE Cambridge Studio and published by Sony Computer Entertainment for the Sony PlayStation. It was first released in Europe and North America in October, 1998, and in Japan on June 17, 1999.

The game is set in the medieval Kingdom of Gallowmere and centres around the charlatan protagonist, Sir Daniel Fortesque, as he makes an attempt to stop antagonist Zarok's invasion of the kingdom whilst simultaneously redeeming himself.