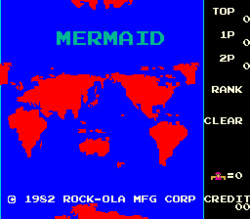 Mermaid is a boating arcade game that was developed by Sanritsu for the Rock-Ola Manufacturing Corporation in 1982; it uses a Zilog Z80 running at 4 MHz, with two General Instrument AY-3-8910s running at 1.5 MHz for sound. The player must use a four-way joystick to take control of a one-mast yacht (which is the eponymous "Mermaid") - and as soon as it pulls out of the harbour at the start of the game, it will immediately be drawn into a race for the next berth. Along the way, you will have to change headings and tack by catching on with fast breezes and currents that will improve your time; but you will also have to watch out for islands, stormy seas and dangerous dolphins that can upturn the Mermaid, and cause it to sink to the bottom of the ocean. This was also the only title from Rock-Ola (even though it was not developed by them), to allow scores that do not end in "0", like many of the Atari and Midway games from that period; the gameplay is also similar to Kersten's River Patrol.