From StrategyWiki, the video game walkthrough and strategy guide wiki
(Redirected from Might and Magic X: Legacy)
Jump to navigation Jump to search 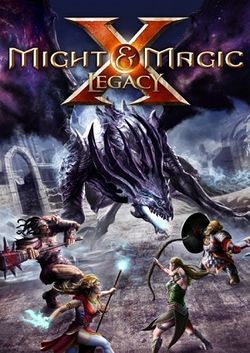 Might & Magic X: Legacy is a first-person role-playing game developed by Limbic Entertainment and published by Ubisoft on January 23, 2014 for Windows (a Mac OS version was released later on April 16). Despite being the tenth entry in the mainline Might and Magic series, the game follows the events of Might & Magic Heroes VI instead of being a direct sequel to Might and Magic IX.

The game focuses on events occurring in the Agyn Peninsula of Ashan, on the continent of Thallan, following the war created by the arcangel Uriel. A coup has occurred in the city of Karthal, and a party of raiders who arrive in the region are drawn into a complex plot in the region that threatens to escalate tensions in the various nations.

I: Secret of the Inner Sanctum · II: Gates to Another World · III: Isles of Terra · IV: Clouds of Xeen · V: Darkside of Xeen (World of Xeen) ·
VI: The Mandate of Heaven · VII: For Blood and Honor · VIII: Day of the Destroyer · IX · X: Legacy