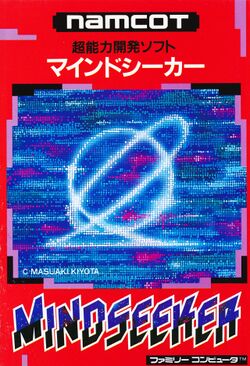 Mindseeker (マインドシーカー, Mindseeker?) is a text adventure game developed and published by Namco in Japan in 1989 that tests the player's extra sensory perception and latent psychic ability. It features Japanese TV psychic Masuaki Kiyota, who is best known in his native land for a spoon-bending act.

The focus during the first half of the game is going through basic training and taking finals exams at a Psychic School under the direction of Psychic Kiyota (Masuaki Kiyota). During the second half, you improve your psychic ability while doing events in Psychic City. The player must clear many mini-games and proceed with the goal of meeting Kiyota.

The player can explore the world using two commands: Feel and Exit. Exit will simply move the player character to a new area, while Feel is how the player interacts with the various objects and people in the world; for the purposes of the game, the term "feel" is analogous to "sense". The player is also able to input their own name upon starting the game. As well as the adventure game elements, much of the game involves playing mini-games designed to test the player's psychic ability, such as a card game where the player must guess which symbol will appear next.

The game was never released outside of Japan, nor was it translated from Japanese into any other language. It was poorly received by magazine review squads when it was released.