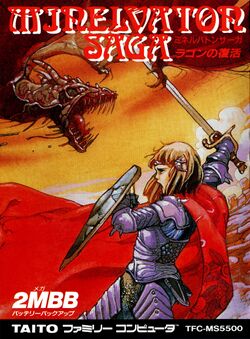 Minelvaton Saga (ミネルバトンサーガ ラゴンの復活, Minelvaton Saga: Ragon no Fukkatsu?, lit. Minelvaton Saga: Revival of Ragon) is a console RPG developed by Taito for the Famicom and published in 1987. It featured a backup battery for saving games, and a method to hire companions. Combat occurs through collision based action sequences similar to the Ys series or Hydlide series as opposed to a turn based menu system. It was followed up by a sequel called Silva Saga for the Famicon, released five years later in 1992 and a second sequel called Silva Saga 2 for the Super Famicon. Both Silva Saga and Silva Saga 2 were turn based RPGs. The game was never sold outside of Japan, or translated from Japanese to any other language. The game was fan translated to English in 2011.