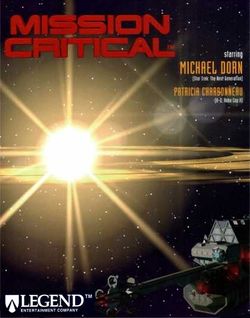 Mission Critical is an adventure game released in 1995 by Legend Entertainment. Though its main advertising point was the presence of Star Trek: The Next Generation actor Michael Dorn, he played a very small role in the game. The game also featured a leading role by American actress Patricia Charbonneau, best known for her role in the film Desert Hearts.

In Mission Critical, you play the sole survivor of the USS Lexington and USS Jericho, a pair of starships sent by the Alliance of Free States on a secret mission to a world far from Earth. You are the only person capable of completing the mission, and saving not only the Alliance, but thousands of star systems from total destruction.