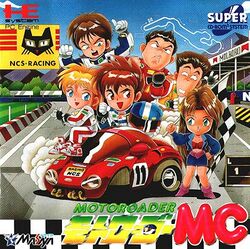 Moto Roader MC (モトローダーMC, Moto Roader MC?) is a futuristic racing game developed and published by NEC for the PC Engine CD on December 18, 1992 in Japan only. It was later made available on the Nintendo Wii U Virtual Console. The game is the third and last in a series which includes Moto Roader and Moto Roader II. Moto Roader MC was rereleased for the Nintendo Switch, Xbox One, Xbox Series X, PlayStation 4 and PlayStation 5 on February 25, 2022 in Worldwide by Ratalaika Games.