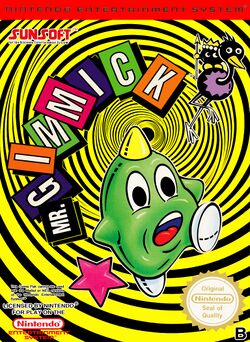 Mr. Gimmick, known in Japan as Gimmick! (ギミック!, Gimmick!?), is one of Sunsoft's lesser-known titles as it was only released in Japan and Scandinavia. The colourful and cute graphics hide the freakish difficulty underneath created by the rather slippery controls, tough landscapes, and the various enemies and bosses inhabiting this strange world. The bright visuals are a change from the usually dark and more serious tone of some of Sunsoft's other games. While it did not get the recognition it deserved at the time of its release, Gimmick! is still a technical marvel of a game that became a cult classic for pushing the limits of the Famicom. It was later re-released in Japan as part of Memorial☆Series SUNSOFT Vol.6 for PlayStation on November 21, 2002. The three releases are noted for having different quality soundtracks, as the original Famicom release used a unique and expensive audio chip that could not be replicated.

For every birthday of her young life, a certain little girl received a stuffed toy from her beloved parents. As that special day was approaching, the girl's father was shown to the sales floor by a store clerk. Yumetarō (ゆめたろー, Yumetarō?), a living doll-like being who was merely wandering in curiosity, hastily ducked into a pile of pink inanimate duplicates and resumed the stillness of an average toy. However, he was chosen by the father for standing out in the crowd and gift-wrapped. When Yumetarō was presented to the girl, the two somehow had an unspoken bond. The girl quickly favored Yumetarō over her five previous toys, who perhaps couldn't help but feel anxious over the prospect of abandonment. While she was sleeping, they suddenly came to life and took her to another dimension. Yumetarō resolved to track down his new owner and retrieve her from this fantastical world.