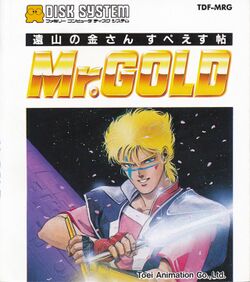 Mr. Gold: Tooyama no Kinsan Space Chou (Mr.GOLD 遠山の金さん すぺえす帖, Mr. Gold: Tooyama no Kinsan Space Chou? Mr. Gold: Kinsan in Space) is a graphical text adventure game developed by Toei Animation for the Famicom Disk System, and published in Japan in 1988. The game is based on an anime OVA "Tooyama Sakura Uchuu Chou - Yatsu no Na wa Gold" (or simply Samurai Gold) which in turn is loosely based on real-life samurai Tooyama Kagemoto. Mr. Gold is a sci-fi adventure about a hero with a cherry blossom tattoo who fights crimes across the cosmos. This character archetype is usually contributed to fictional adaptations of the Tooyama Kagemoto legend, though rarely with a Ziggy Stardust sci-fi theme.

The game plays much like any other NES text adventure: The player is presented with a window of what the main character can see and is given options in various menus for what the player can do at any given moment, such as pick up nearby objects or talk to nearby people. Much of the game is spent following co-ordinates to different locations and discovering where to go next.