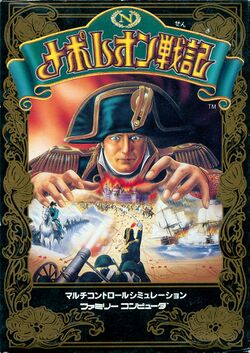 Napoleon Senki (ナポレオン戦記, Napoleon Senki? lit. Napoleon military history) is a strategy game developed by Lenar, and published by Irem in Japan for the Famicom in 1988. It recounts many of the battles fought by Napoleon, as you take command of his armies in an attempt to conquer the world. The game was never released outside of Japan, or translated form Japanese.

Hero. Liberator. Genius. Adulterer. War criminal. Common lunatic. Those are just a few of the words historians have bestowed on the man that almost conquered the world, the man the world knows as Napoleon. Whether you view him as one of history's greatest leaders or as a demented tyrant, few people in the annals of history fascinate the way Napoleon Bonaparte does.

In Napoleon Senki, you get to take control of Napoleon and his armies, reliving his most famous battles in a primitive but surprisingly well-executed strategy game. Also translated as "Battles of Napoleon" or "Napoleonic Wars," Napoleon Senki suffers some from being released on the NES. However, it's actually pretty fun, if a bit difficult. The actual game play takes a little while to get the hang of if you don't speak Japanese. However, once you know what you're doing, it can be a fun (and sometimes quite challenging) experience.