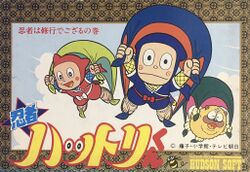 Ninja Hattori Kun (which roughly translates to Little Ninja Hattori), was an manga and anime series in Japan. It was created by the same author who created Doraemon, and was aired on television around the same time. The story was about a ninja who was in search of his master in order to complete his training. While searching for his master he made a young boy his temporary replacement master, in order to develop the boy's confidence, and they went on many adventures together. It was aimed at a young audience.

Hudson Soft acquired the rights to develop and publish a game around the series. It was the fifth best selling Famicom game released in 1986, selling approximately 1,500,000 copies in its lifetime. In the game, you control Hattori-kun in a side scrolling action game. Hattori must run to the right over various terrains, but primarily through the woods. In addition to using throwing stars, Hattori can access one of 12 other ninja abilities, but he must first collect scrolls that provide those abilities before he can use them. Due to sluggish controls, it can difficult to clear some of the obstacles that you will face without the ninja abilities to enhance his mobility.