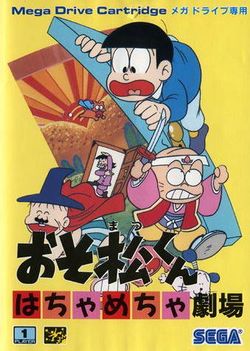 Osomatsu-kun: Hachamecha Gekijō (おそ松くん はちゃめちゃ劇場, Osomatsu-kun: Hachamecha Gekijō? "Nonsense Theater") is a platform video game by Sega, which was released in 1988 for the Sega Mega Drive. It was one of the first four games released on the system during the Mega Drive's introduction; however, it was only released in Japan. The game was based on the Manga/Anime series Osomatsu-kun by Fujio Akatsuka; players controlled the title character and encountered many of the series' characters in a strange (but comical) world.

The player controls Osomatsu (leader of the sextuplets) through a total of three stages, armed only with a short-range slingshot. Each stage has a distinct path the players need to follow in order to proceed, though each stage has a variety of different places to go. By pressing the "up" button at an open door the player enters another section of the level, where different items await. By falling into a hole the player enters an underground (or underwater) level, and by jumping on the back of a turtle (or a floating golden platform), the player will be taken to a cloud-world (or somewhere else). In order to fight the boss of each stage, the player has to locate and defeat the stage's mini-boss (Chibita or Dekapan) in order to locate and defeat Iyami, the stage's boss. Every time a boss or mini-boss is defeated, Osomatsu becomes stronger; his life-bar and slingshot distance both increase.

The player can enter shops (run by Totoko) where they can purchase power-up items which grant limited powers (the player's inventory is located on the "pause" screen). The shops also have mini-games, such as a slot machine and a small path-finding game. The player starts each game with three lives, and cannot earn any "continues." Additional lives are awarded by collecting six 1-Up Cards, which are located randomly at each level.

After Chibita and Iyami (the biggest rivals of Osomatsu) were defeated by the sextuplets, they decided do capture them (except Osomatsu). After discovering that your brothers were captured, Osomatsu sees a door that appears next to him and enters to rescue his brothers.

shoots balls from a slingshot that only go a short way before disappearing.

bring up some sort of items menu;

in the pause menu select the item and

use that selected item.