From StrategyWiki, the video game walkthrough and strategy guide wiki
(Redirected from Outfoxies)
Jump to navigation Jump to search 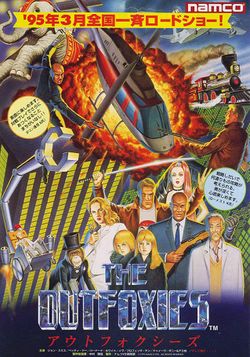 The Outfoxies is a platform/fighting arcade game that was released by Namco in 1994; it runs on the company's NB-1 hardware, and one player can play it alone against the CPU, or two players can play simultaneously, using an 8-way joystick and two buttons (one for attacking, and the other for jumping) to take control of two of seven assassins, each of whom have been hired by Mr. Acme to take out the other six (38-year-old John Smith, 10-year-old monkey, Dweeb, 33-year-old Betty Doe, 36-year-old Bernard White, 82-year-old Professor Ching, 11-year-old twins, Danny and Demi, and 29-year-old Eve) - and each of the assassins has a unique stage on which the player-controlled one must defeat them (Smith has a skyscraper, Dweeb an airplane, Doe a centre for marine biology, White a steam train, Ching a laboratory, Danny and Demi a speedboat, and Eve a circus tent!). Once all six of the other assassins have been defeated, the player-controlled assassin meets Mr. Acme (and his wife!) at his house, who will immediately turn the lights out on them and try to escape in their helicopter to avoid paying them; the player-controlled assassin then has to destroy the helicopter before the time runs out to win the game. Each of the assassins also have their own unique pictures for the game's "stage clear" and ending sequences which means that a player shall have to play through it with all seven assassins to see all of them - and the "stage clear" sequence of Dweeb sees the channel on the television being changed to a Japanese spoof of Jim Henson (1936-1990)'s The Muppet Show.