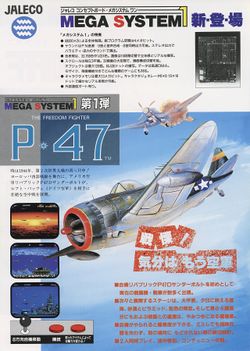 P-47 - The Freedom Fighter is a side scrolling shooter developed by NMK and published in arcades around the world by Jaleco in 1988. In arcades outside of Japan, it was retitled P-47 - The Phantom Fighter. It features simultaneous two-player game play.

It was ported to the PC Engine under the original title, published by Aicom in 1989. The PCE port pared down a lot the game's bosses and cutscenes, and simultaneously two-player play was removed to fit the game onto a 2MB HuCard. It was later ported to several popular home computers around Europe under the title P-47 Thunderbird and published by Firebird Software in 1990.

Taking place in the European theater during WWII the game pits the player - in the form of the titular P-47 Thunderbolt USAAF fighter-bomber plane - against the diabolical forces of the Third Reich. You destroy aircraft, tanks, ships, and other forms of vehicles through eight stages. The game features power-ups (bombs and missiles for example) that changed the plane's alternate fire button, leaving the default cannon as the permanent standard fire button.