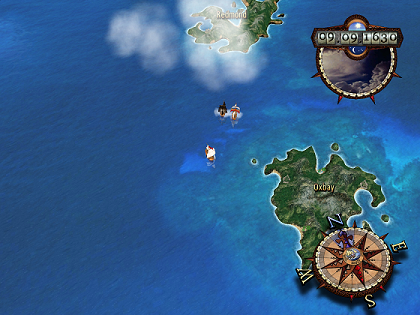 The Pirates of the Caribbean world map lets you travel between the islands in the game. Fleets are represented by single ships and move around the map in real time. Fleets keep moving around even when you are not.

The bottom right of the map holds your compass, giving you an idea of direction after spinning the map around, the top right holds your calendar as well as a visual representation of the time of day, which can be used to determine when to switch from world map to the actual sea when approaching an island. If an encounter is available you will see an icon in the top left of the screen representing this as well.

zooming out. To leave the minimap you can press Space.

You can interact with other fleets by sailing to them and entering the sea when their icon pops up in the top left corner. Most fleets will try to avoid you, unless you are their enemy and they have some advantage over you. To travel to an island, sail close to it until the island icon pops up and press Space to enter the sea, then use Enter to select the destination to sail to (usually a place where you can moor, or a ship that can be attacked).

There are three types of encounters on the world map in Pirates of the Caribbean; Fleets, Storms and Islands. 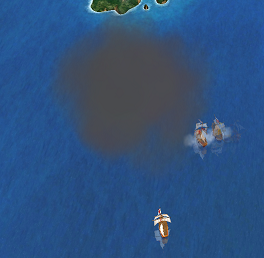 When close enough to another fleet you will see either a grappling hook or ship icon in the top left of your screen. The grappling hook indicates a hostile fleet, the ship indicates a friendly or neutral fleet. Some hostile fleets will actively chase you to force a fight on you, they tend to do this when their fleet has some sort of advantage over your fleet (more ships, bigger ships, etc)

A special variant of the fleet encounter is the naval battle, where two hostile fleets are fighting each other, you can enter the battle to try to support one side of the battle or you can just watch the hostile fleets take eachother out. If one of the two fleets is hostile to you they will also target you though.

When you get close to a storm, indicated by a grey cloud, you will sea a storm icon popping up in the top-left corner. When entering the sea then (or when being forced into the sailing mode) you will have to last through the storm. Usually this means striking all sails and waiting for the storm to end. While this is happening your ship will take a lot of damage though. 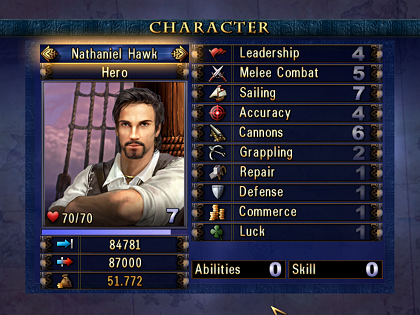 When opening the character screen you will see something like the image to the left, on the left side of this window you can see your reputation, your level, hitpoints, gold and experience, as well as the experience needed for the next level. On the right side you can see your skills as well as free ability and skill points. Note that you can also manage the skills and abilities of your officers that are currently in your party.

The three values under the character portrait represent your current total experience, the total experience needed to advance to the next level and the amount of gold you currently have.

The character skills are shown on the right side of the screen, each skill influences different actions in the game. A list of the skills with a short explanation is added below:

Abilities give you certain traits or usable abilities in (for instance) combat. They range from a passive 10% damage resist in land combat to better prices from traders. The abilities can be subdivided into several categories, all of which are listed below.