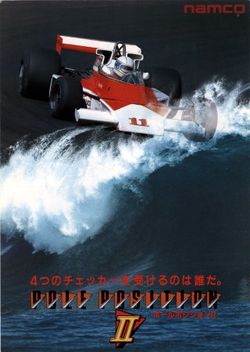 Pole Position II was more of an update than a true sequel to Toru Iwatani's original Pole Position. It features three new race tracks, in addition to the original Fuji Speedway - Suzuka, Seaside (which resembles Long Beach), and a Test circuit (which resembles Indianapolis). It also contains a slight increase in the amount of color variation to indicate the difference between tracks. The cars also have a different color scheme and the explosions now show debris. This sequel also featured "striped" roads; a graphic characteristic designed to give the game a greater sensation of speed, and something that would be copied, and used to great effect, many times in the racing games that followed over subsequent years. Other than these changes, the gameplay is identical to the original and runs on the same hardware (a Zilog Z80 and two Zilog Z8002 microprocessors run at 3.072 MHz), and has stereo sound.

As with the original Pole Position, this game could either be found in a standard upright cabinet format, or in a sit-down cockpit environment cabinet for a heightened realism. As before, Atari was granted the rights by Namco, to distribute the game in North America. Unlike the original arcade game, Atari did not port the game to several systems. A version was developed to showcase the graphical capabilities of the Atari 7800 in 1984, but when the Tramiels purchased Atari, they halted all further development of home consoles in favor of expanding their Atari home computer line. When the Nintendo Entertainment System resurrected the American home console market, Atari resumed their plans to launch the Atari 7800, with Pole Position II as the system's pack-in game, but Atari simply failed to compete with Nintendo. It was not due to the age of their technology either - the Atari 7800 had been designed in 1984 while the Famicom had been designed in 1983.

Despite being an improved version of the original, Pole Position II was only released on two systems. It was included as the pack-in game with every Atari 7800, so it is quite common.