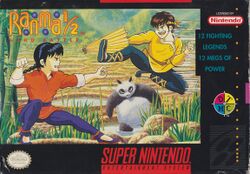 Ranma ½: Hard Battle (らんま½ , Ranma ½ Bakuretsu Rantou Hen?), known in Europe as just Ranma ½, is a 2-D fighting game released by Masaya and DTMC for the Super Nintendo. It is based on the manga and anime series Ranma ½. Hard Battle is the second Ranma ½ game to be translated into English, this time keeping the original graphics, music, and names of the characters, though the voices were still dubbed into English. The game's English translation (but not its English voice acting) was provided by Viz Media.

Hard Battle has three modes of play: the standard one-player tournament mode, a two-player competitive mode, and a two-player five-character team challenge mode. There are ten characters in the game (twelve if Ranma and Pantyhose Taro's cursed forms are counted). All twelve characters are available for the two-player modes. After completing tournament mode Pantyhose becomes a playable tournament character. Happosai is unlockable by entering a code.

Play control is simpler than most fighting games. Each of the SNES controller's buttons (plus

) could be assigned to activate one of four moves: jump, block, normal attack, and power attack. Different normal and power attacks could be triggered depending of a variety of factors, such as how far the attacker is from the opponent, if he is ducking, or if a directional arrow is pressed along with the attack button.

Instead of entering a series of directional movements and pressing an attack button to activate a special attack, most moves were done by holding

Another feature of Hard Battle was the ability to recover from throws. By pressing an attack button after being thrown the character could attempt to land on his or her feet and take less damage. Unlike many fighting games, opponents never get stunned after being hit with powerful attacks or a combo.

Each character has their own story. In any case, the character was manipulated into fighting the other characters by Principal Kuno.