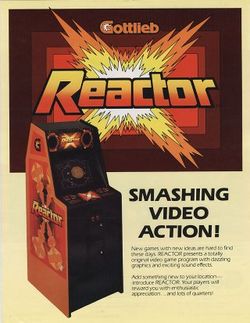 Reactor was the first game developed by Tim Skelly as an independent contractor with Gottlieb, the company responsible for Q*Bert. Prior to designing Reactor, Skelly was a game designer for Cinematronics. In designing Reactor, Skelly attempted to break the molds of uniques design, visual impressiveness, and audio coolness. Some say he succeeded. The Vortex core in motion is still a stunning visual to which screen captures can not do any justice.

In Reactor, you control an undefined object whose only ability is to push particles around, and deploy decoys of itself. You are placed inside of a nuclear reactor that is on the verge of a meltdown. Particles are running rampant, and you must dispose of them by pushing them in to the outer wall where they can be neutralized. The problem is, those same walls can kill you. All the while, the core of the reactor is growing and pushing you and the particles closer to the dangerous wall. It's push or be pushed in this race to prevent nuclear fallout.

Reactor was a bit of a sleeper hit. It never achieved tremendous fame, but Parker Bros. did purchase the rights to publish the game at home from Gottlieb, just as they had done for Q*Bert. Oddly enough for Parker Bros., who had a habit of releasing every game they made on as many conceivable systems as possible, they only published a version of Reactor for the Atari 2600. At least one other version was known to be planned for the Intellivision, but it was never released. 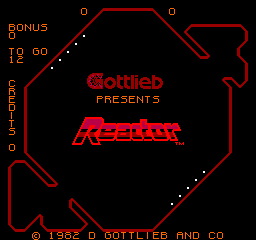 The core of the nuclear reactor is growing out of control. If it isn't controlled, the plant will have a meltdown with catastrophic consequences. You are charged with the mission to control a remote device that can potentially clear the reactor of rouge particles. Push them into the wall, or use them to flip the control rods that can reset the size of the core. But if the particles push you into the wall, the device is destroyed, and you only have so many. Use the devices limited ability to leave decoys of itself when the action gets too hot.

This is the device that you control. It can move freely around any open space inside of the reactor, but it can not, under any circumstance, touch the outer wall. Particles are attracted to the position of the device, and will continuously bombard the device for as long as they remain active. The device has two abilities. One is to tap into the unlimited energy source of the surrounding radioactivity to increase its repulsion abilities. But note that when the energy field is active, the particles' ability to push you increases as well, so use it wisely. The other ability is to deposit a limited number of decoys in the core. Decoys temporarily distract the particles away from you and to the position of the decoy. Well place decoys can destroy a lot of particles if they are close to the wall. Any decoys that remain unused by the end of the game are worth 500 points. You can in fact earn an extra life and continue playing if you reach the proper score while converting unused decoys into points after your last life.

If a basic particle (positron, pion, or neutrino) is left in the core for too long, eventually it will absorb too much radioactive energy and transform into a photon. Photons are deadlier than positrons because they can pick up a lot of speed. Fortunately, photons eventually expire if they don't collide with the wall.

Along two walls on either side of the expanding core are a set of control rods. The first two stages contain with three on either wall, and the remainder of the stages in the first level and all of the second contains five rods per wall. The third and fourth level and contains seven, and the levels and beyond contain nine. Knocking down all of these controls rods are key to shrinking the core back down to its original size in the middle of a stage. Unfortunately, only the particles can knock the controls rods down, your device cannot. If you can push particles into an entire set of control rods on one side, the core will shrink. If you can knock down both sets of control rods, you will also earn one extra decoy. Anytime that you die, the state of every control rod is reset.

There are two bonus chambers in opposite corners of the core. If a particle gets trapped inside the chamber, you will earn an increasing amount of bonus points, which are not awarded to you until you lose a life. Although your device can enter a chamber, it is not advisable since it is very closed quarters in there and you are extremely vulnerable to being pushed into a wall. Knock as many particles into the bonus chambers as you can for high scores.

There are four levels of increasing difficulty in the game. Each level changes a) the exposed nature of the reactor core and b) the visibility of the outer wall. In the first and third levels, the core is not exposed and you can press against it without fear of dying. In the second and fourth levels, the core is exposed, resulting in what's commonly known as the Vortex. The Vortex will destroy your device if you get sucked into it. You can touch the outer edges of it without dying, but you will commonly be whipped around by it in a clockwise direction. In the first two levels, the outer wall is visible, while in the last two, it is invisible, only revealing itself briefly when a particle collides against it. By level three, you should be aware of the walls extents so it shouldn't be difficult to avoid touching the wall even though you can't see it. The control rods help to give you some indication of its placement. After you complete the fourth level, that level (Vortex core, invisible walls) repeats until the game ends.

Save your decoys for the Vortex
Compared to levels 2 and 4, levels 1 and 3 with the protected core are a piece of cake. Therefore, they should be used to rack up as many decoys as possible before you proceed to the Vortex levels where the decoys can mean the difference between life and death.
Knocking down control rods
It can be hard to get particles to cooperate and move into the rods. One generally safe strategy in levels 1 and 3 is to hug the top of side of the core, hold the energize button down, and wait for it to reach the size where particles that approach you will be repulsed into the rods. Once the core gets too big, this becomes difficult to do.
Surviving a large core
Once the core gets to big the maneuver around safely, hug the wall of the protected core and let the particles turn in to photons and wear themselves out. Because of the difficult of the Vortex core levels, it is more important to eliminate the particles quickly or knock down the control rods before the core become inescapable.
Using the decoys to earn more decoys
Place your decoy right in front of a set of control rods, as close to the wall as you dare to. This is especially important to do on the Vortex core levels. The particles may or may not knock down a lot of the rods, but you can "persuade" them to hit more if you hang out in the area. By the time the decoy leaves, you should only have a few rods remaining which you can maneuver the particles into and shrink the core back down before switching to the other side and leaving another decoy.
Using the decoys for points
This is less useful for survival, but if you're trying to rack up a high score, drop decoys right in front of the bonus chamber entrances. Particles will flock to the decoy and often slide right past them and into the chamber. The more particles you have bouncing around in there are once, the more bonus points you earn.

The Atari 2600 conversion of Reactor is a rather faithful adaption. Besides the missing animation, which is to be expected, only two other features were changed. The bonus chambers appear across from one another and flip from the bottom to the top of the screen and back every time a particle enters and exits the chamber. Also, the number of controls rods went inexplicably from odd numbered sets to even numbered sets (4, 6, 8, and 10). Everything else, including the two different cores, and visible or invisible walls, is present. You may even select which of the four levels you wish to start from.