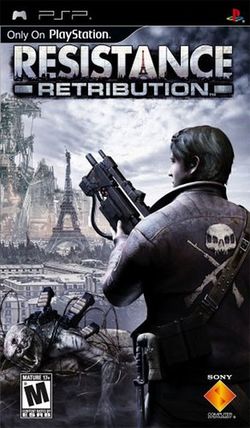 Resistance: Retribution is a third-person shooter handheld game developed for Sony's PlayStation Portable. It was announced on July 15, 2008 at Sony's E3 press conference and was released on March 17, 2009. Sony Bend said in an interview with GameSpot that they worked with Insomniac Games in the initial process of the game design.

The story takes place between Resistance: Fall of Man and Resistance 2. Set in the weeks after Resistance: Fall of Man, Retribution follows the story of former British Royal Marine James Grayson. After being forced to kill his own brother inside a Chimeran conversion center, Grayson goes on a vendetta to destroy every conversion center he can find. Eventually Grayson learns that the Chimera have evolved a new method of converting humans to aliens in Western Europe. The European resistance – the Maquis – enlist Grayson's help, and he joins Cartwright and Parker in Operation Overstrike to retake the European continent from the Chimera.