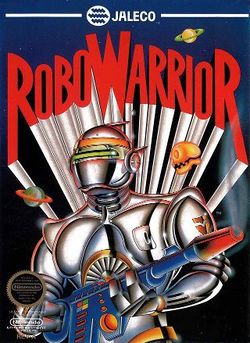 }} Robo Warrior, known in Japan as Bomber King (ボンバーキング, Bonbā Kingu?), is a 1987 overhead-view action puzzle game developed and published by Hudson Soft for the Famicom, and published by Jaleco for the NES. It has been suggested that the game is loosely linked to the Bomberman series, one reason being the Japanese version's name of Bomber King. An MSX version of Bomber King also exists.

Robo Warrior takes place on an alien planet named Altile. Players pilot a cyborg named ZED (an acronym for Z-type Earth Defence) as he raids Altile to fight the Xantho empire and destroy its leader, Xur. ZED uses bombs to hurt enemies, destroy his surroundings, and uncover various hidden items. To progress from one period (level) to the next, he must find a number of keys to open a locked door.

In 1991, Sunsoft developed Bomber King Scenario 2 for the Game Boy; this game is titled Blaster Master Boy in the US, and Blaster Master Jr. for its European release despite not being a true sequel to the original Blaster Master.

In a desperate measure to combat the overpopulation of Earth, scientists work to create an artificial planet named Altile, named after the scientist who designed it. During the construction of Altile, humanity has become united and peaceful. During this new era of prosperity, Earth decommissions the RoboWarriors, a force of heavily armed half-man half-robot war vehicles. But from another dimension, aliens calling themselves the Xantho Empire and lead by the being Xur invade planet Altile and terraform it for their own uses. The survivors of Altile send out a distress call to Earth. Receiving this message, the people of Earth quickly activate the latest and most powerful of the RoboWarriors, a model known as ZED (Z-Type Earth Defense) and send it at top speed to Altile.