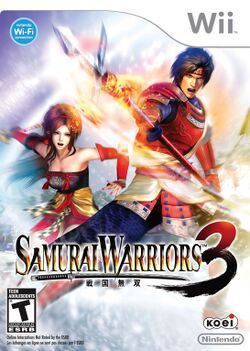 Samurai Warriors 3 (戦国無双3, Sengoku Musou 3?) is the third in the series of Samurai Warriors hack and slash games. It was developed by Omega Force for the Wii, and published by Koei in Japan, and Nintendo in all other regions. As well as the series' hack and slash gameplay, it includes a new mode based on the Famicom Disk System title Nazo no Murasame-jou. Seven new characters are included, alongside the original 37, 30 of which have their own storyline. These thirty storylines are all intertwined with the others. The game includes such new features as the Spirit Attack, Ultimate Musou, Warrior creator, and a "Historic Battle" mode. The game's control scheme was designed with the Wii's Classic Controller Pro in mind.