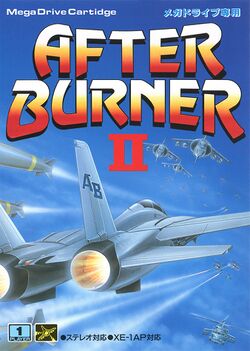 After Burner II is a Z-axis shooter follow up to Sega's After Burner. It is less of a sequel and more of an update to the original game, and was released in 1987, the same year as the original. The game would see multiple conversions to various Sega and non-Sega home consoles, although many of these conversions struggle to match the speed of the arcade version. The 1996 Sega Saturn conversion is one of the few to be considered "Arcade perfect", as it operated on the same code. The 32X version, which is almost as close, is called After Burner Complete.

The arcade version of After Burner II was available in a stand-up model as well as a deluxe sit down cabinet modeled like a fighter jet cockpit. The cockpit was built on hydraulics, which simulated flight by moving the player roughly 25 degrees in both a horizontal and vertical axis, in a rough representation of the fighter's in-game movement. Stereo speakers were placed at the ear level for the deluxe cabinet version, creating a very immersive (and sometimes deafening) play experience. The arcade controls consisted of a flight stick with multiple buttons and a throttle stick which could be used to slow down the aircraft or activate it's afterburners. The addition of the throttle was the most notable change from the original After Burner.

There 23 stages in the game: Stages 5, 13 and 23 are non-playable landing cutscenes and levels 8 and 17 are canyon bombing runs. The remaining stages involve air to air combat using an unlimited cannon, and a limited supply of missiles. The missile supply is restored approximately every 2-3 levels in a non-playable air-to-air refueling sequence, as well as in the first two landing cutscenes. Cameos from the vehicles in Hang-On, and Out Run, make appearances during the first two landing cutscenes, driving down the runway in front of the F-14 as it is taking off.

Points were rewarded for both distance traveled and enemies destroyed. For unknown reasons, the designers decided to reward players with literally millions of points for performing any sort of action in the game, making the high score table sometimes showing players with scores in the billions.