This is the first game in the Shinobi series. For other games in the series see the Shinobi category. 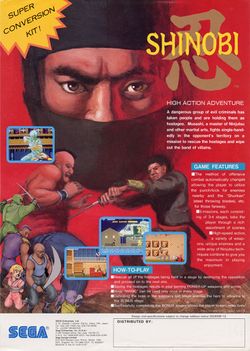 For the Game Gear game released as Shinobi, see The GG Shinobi.

Shinobi (忍 -SHINOBI-, Shinobi?) is an arcade game, developed and published by Sega. It was originally released in 1987 and ported to numerous systems. The game spawned numerous sequels.

A re-worked version was released for Xbox 360's Xbox Live Arcade on June 10, 2009 with HD support and online leaderboards. The original coin-op version of the game was released for the Wii Virtual Console in Japan on July 14, 2009, in the PAL regions on October 23, 2009 and in North America on December 7, 2009.

Shinobi is about a ninja named Joe Musashi who has to stop a criminal organization called "Zeed" who are kidnapping the children of the Oboro clan. Through five missions of increasing difficulty, Musashi must make his way to Zeed's headquarters and free all the hostages before confronting Zeed's leaders known as "Ring of Five", which are formidable enemies on their own. "Ring of Five" are the bosses at the end of each level. Below is the list of them.

The GG Shinobi:
PlayStation 2:
Other: