Shiryou Sensen: War of the Dead 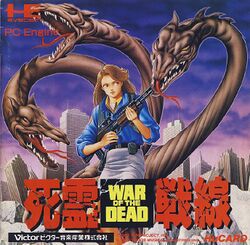 This horror action RPG revolves around a female SWAT member named Lila who must rescue survivors in an isolated monster-infested town known as Chaney’s Hill. As the plot unfolds, it is later revealed that the monsters have come from a portal to another world and the family that has secretly protected it for generations.

The game mixes the random encounters in open environments of Dragon Quest with the real-time side-view battles of Zelda II. The survival component of this horror games comes from the limited ammunition for each firearm. Players must choose when to fight and when to conserve ammo, and finding bullets is always a top priority. The game also features a limited inventory and crates to store items. War of the Dead uses a day-night cycle in which the player fights during the day and can sleep at night to recover health. A record is kept of how many days the player has survived.

The PC Engine port boasts an increase in onscreen colors, and an overhauled battle system. Battles take place in large, horizontally scrolling arenas, where you can escape by walking off either the left or rightmost edges. A leveling system is introduced, as certain enemies drop blue orbs which give EXP, and at set points this results in a stat boost. Enemies also drop ammunition, health pick-ups, and PSI refills. To balance this there are far less recovery items on the world map compared to the PC-88 release. With guns now requiring ammunition, there’s a communal pool of bullets, with each weapon using a different amount.

Due to the levelling system and need to conserve ammunition, the PC Engine game starts off extremely difficult. After a few hours though the difficulty drops off substantially. However, if your EXP goes over 9999 it resets all the way to zero and the player will die. Unlike the computer versions it has no save feature, and instead relies on a very cumbersom 54 character password. While this version was never published outside of Japan, an English fan translation was released in 2017, and can be found here.