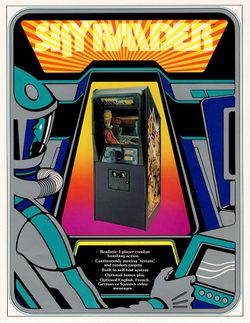 Sky Raider is a vertical scrolling shooter arcade game, that got released by Atari in 1978; it utilizes a Motorola M6502 microprocessor (running at 1.005 MHz), and the player must use an analogue yoke, to direct a crosshair around the downward-scrolling background, with two thumb buttons for dropping bombs upon it. Towers are worth 350 points, while bridges, cities, and oil refineries are all worth 450, and enemy planes are worth 800 - but as with Atari's own Starship 1 (which had been released in the previous year), nothing fires at you as the gameplay is time-based (rather than life-based). The timer shall start at between 60 (1:00) and 120 seconds (2:00); if you manage to score between 22000 and 43000 points (depending on how the cabinet is set), the game shall be extended for between 30 and 60 additional seconds (which, as with the "extended play" value, depends on how the cabinet is set).