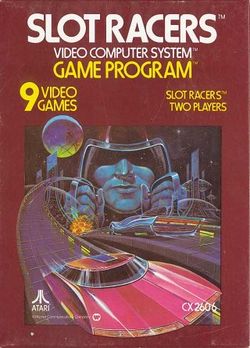 Slot Racers was one of the eleven Atari 2600 titles that were part of the second wave of games released in 1978. It can best be compared to a stripped down Combat. Two players race around a maze, attempting to shoot each other with missiles. In most cases, the missiles turn corners, and in all cases, the player vehicles are incapable of going in reverse. There is technically no single player option, so the game really does require a second player to play the game properly. Slot Racers is not one of the more fondly remembered Atari 2600 games. It was released as Maze under the Sears Tele-Games label.

Each game of Slot Racers begins with both players at 0 points. A player earns one point every time they hit their opponent with a missile. The game ends when one player reaches 25 points. Games are determined by three factors; the maze arrangement, the speed of the vehicles, and the speed or behavior of the missiles.

Maze Arrangement
Below are the four maze arrangements that are available for every game variation. Some offer more defense, and some off less.

Vehicle Speed
Vehicle Speed determines what the top speed of both players' vehicles are. The faster the speed, the trickier the vehicles are to steer. Vehicles will generally turn every corner when they are forced to, or perform a 180 if they travel down a dead-end. Vehicle speed generally increases throughout the first 7 variations, and the slows down a bit for games 8 and 9.
Missile Speed
Games 1 through 4 feature Missiles that travel faster than the vehicles, no matter how fast the vehicles are. Games 5 through 7 feature Missiles that travel slower then the top speed of the vehicles, changing the strategy somewhat to getting ahead of your opponent and bombing them. Games 8 and 9 feature Missiles that do not turn corners at all, and come to a stop as soon as they hit a wall, so a direct hit must be fired to succeed.