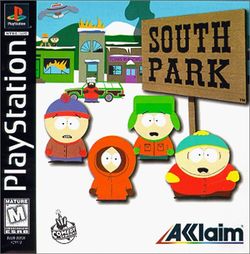 A first-person shooter, based on the show South Park.

Note that there are some differences between the Windows/PlayStation versions and the Nintendo 64 version - more music and characters, better graphics (only in PC version) and multiple enemy types per level (instead of just one - i.e. just turkeys or clones).

A comet is heading towards South Park, and it seems to be causing lots of weird stuff. Mutant turkeys, killer cows, Visitors, clones and others are starting to appear throughout the town. With an arsenal of unusual weapons, you play as Stan, Kyle, Cartman and Kenny, while being guided by Chef. You must stop all those things, to prevent the comet from landing.

Play in single-player to save the town or in multiplayer head-to-head mode, where you can fight against others.