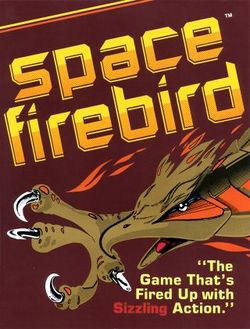 Space Firebird is one of the earlier arcade games developed by Nintendo. It was released in 1980, after Nintendo dabbled with a Space Invaders clone of their own, known as Space Fever. Space Firebird plays a bit more like Galaxian, but without the formation at the top of the screen. Instead, birds spawn onto the screen in sets, usually containing one or two Eagle leaders, and followed by a set of small Gulls. As you continue to destroy birds, the counter at the top of the screen counts down until all of the birds of that stage are eliminated and the action starts over.

In an ironic twist, without the knowledge of the rivalry that would form between Nintendo and Sega in the years to come, Sega licensed the rights to manufacturer Space Firebird in the United States from Nintendo. Space Firebird came only a short time before Radar Scope, and hence before Miyamoto was called in to design Donkey Kong as a replacement for all of the Radar Scope machines. As such, it is relegated to video game history obscurity. 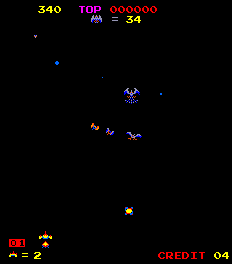 This is your ship. You pilot it along the bottom of the screen at all times. As you move closer to the left or right edges of the screen, the height of your ship of the bottom of the screen increases slightly. As you return to the center, your ship lowers. You can fire up to four shots on the screen at any one time. Try not to shoot more than three, and always keep a fourth in reserve for emergencies. Once per ship, you can activate the warp-drive which surrounds your ship with an invincibility field. The warp-drive slowly propels your ship up the screen, protecting you from any weapon. If you collide with a bird while warping, the bird is destroyed. When the warp drive brings you all the way to the top of the screen, you return at the bottom. You will no longer be able to activate the warp drive until your ship is destroyed and you start over with a new one.

There are three different types of birds. They all behave in a similar fashion, following very particular swooping paths across the screen. It is easier to hit them when they are slowly moving down closer to your ship than when they are flying quickly up above. A bird is deducted from the counter of birds necessary to complete the stage when they are either destroyed, or when they make it past the bottom of the screen. There is no penalty for allowing a bird to reach the bottom of the screen, you simply earn no points for it. The last few birds of a stage can not be avoided. They will continue to attack until you destroy them.

Bombs are the only other threat to the survival of your ship. They appear occasionally when flocks are flying overhead and slowly drop down to the bottom of the screen. They will detonate whether you shoot them or not. When they detonate, they send a shower of bullets scattering in every direction but straight down. As a result, you stand a much better chance of surviving the detonation if you destroy the bomb and remain directly underneath. The number of points you are awarded depends on how low and close to you the bomb is when you destroy it, ranging from 50 for far away, through 100, 150, and 200 points for being successively closer to the bomb.