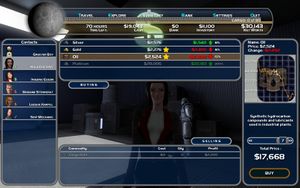 In the game, most of the money is made through purchase and sale of commodities.

The interface is simple, but there are two things to look at. In general, look for stars on the commodity line, to indicate a great deal. Next, look on the right at the percentage. A low percentage indicates a great deal, with 0% being equal to the normally cheapest price, and 100% being the most expensive it can normally get. There are also events from time to time that make significant price adjustments as well.

You first need to find a ship. Look for Peter Mikhail on the second level, who asks you to find 5 boxes of hydraulic fluid. Five of the eight boxes in the level may be found:

Once you help him, look for Dex Renor on the first floor, in the building to the right of the bar. He transports you to the moon, where you perform a bounty mission.

To complete the sidequests cleanly, you should carry 8 energy cells, and 5 platinum.

To defeat Krugger, you will need to speak with the given contact on the moon. You can attack him in a combat mission, or try a diplomatic approach (to complete the diplomatic option, tell him to pay the money and leave - avoid the option for paying interest.)

Once you have the $1.5 million, you can complete the chapter.

There are three factions that you can work with. While you can obtain the first mission from each one, completing it will lock you out of the other two.

Ultimately, you want to break free of Sally. There are three possible main quest chains that can be used. Those three are mutually exclusive. It is not possible to pay Sally off, you must continue with one of the three other factions.

Ganymede is closed until you can enable trading. Sepak with the people, and determine then with Auditor Horus. You need $1 million, but he only accepts it if you have less then 1.5 million and only did the offer then. After paying this, you can access the other traders, and upon return to Europa (even from taking a job at the bartender), gain a lease of the nearby office. (Lie to get the best price).

Lieutenant Dan gets "kidnapped" on Europa after 5 travels. Trading there gets locked down. Look for Snitch, for a combat mission against Dett. Alternatively, head to Io, and locate Lieutenant Dan in a large room accessed by a secret door under some stairs.