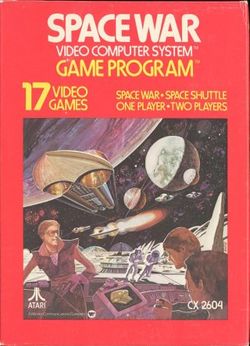 Space War was one of the eleven Atari 2600 titles that were part of the second wave of games released in 1978. It is loosely based on Spacewar!, the famous 1962 computer game by Steve Russell. Spacewar! is considered the first popular interactive video game and it was developed in MIT. Two players compete against each other by piloting a space craft equipped with photon torpedoes. The winner is the player who destroys the opponent more times.

The Atari 2600 version contains 17 variations grouped into two general modes of game play. The first mode stays true to the traditional essence of Spacewar!; players pilot warring space craft in an effort to earn the most points by destroying the opponent. Various options are offered, such as invisible barriers around the edge of the screen, or the ability to warp across the screen, and the presence of a gravity producing sun. In the second mode, called Space Shuttle, players compete to see who can touch the floating space station more times. Space Shuttle was the only mode which was designed to be played by a single player.

In the early days of video games, teaching players how to understand momentum and inertia was a challenge. The game attempts to model idealized Newtonian physics, so once a ship is floating through space, nothing is going to slow it down unless the player applies some thrust in the opposite direction. The speed of each player's missiles is also affected the speed of the ship firing them. It was released as Space Combat under the Sears Telegames label. 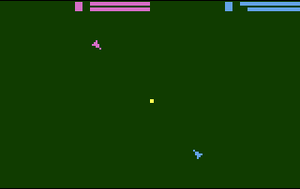 The two players are represented by a pink and blue spaceship in a green field of space. The goal is to score points by shooting your opponent's Star Ship with your missiles. Aim the nose of your Star Ship in the direction you want to fire. Each game of Space War lasts ten minutes or until one player scores ten points. Player's scores appear at the top of the playfield and are color coordinated with the Star Ships.

The two lines to the right of your score refer to fuel and missile supply. The top line is the fuel gauge; the bottom line is the amount of missiles remaining. Each player begins with eight missiles. Once the arsenal is depleted, the game will automatically reset each player with eight more missiles only when both players are out of missiles. In most War games, fuel cannot be resupplied. In games 6 and 7, players can refuel and resupply missiles by docking with the Starbase. Fuel is used by adding "thrust" to your Star Ship or by putting your Ship into Hyperspace.

In Space War, you will score one point when your opponent's Star Ship explodes. A Star Ship will explode when:

The options for Space War include:

Space Sun: In game variations 4 and 5, you must fight the pull of gravity from the sun in the center of the Space Galaxy. Your Star Ship will explode from exposure to the extreme heat and reset to the starting position.
Starbase: In game variations 6 and 7, you must make contact with the Starbase at the center of the galaxy to refuel and resupply your missiles. Your missile and fuel gauges at the top of the playfield will reflect resupplies as your Star Ship resets to the starting point.
Hyperspace: In game variations 2 through 7, you can push down on the joystick to enter Hyperspace. When in Hyperspace, your Star Ship becomes invisible and uses more fuel. It is impossible to be hit by your opponents missiles or to collide with the Space Sun while in Hyperspace. To make your Star Ship drop out of Hyperspace and reappear, push the joystick down again. 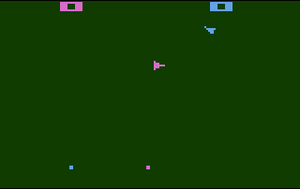