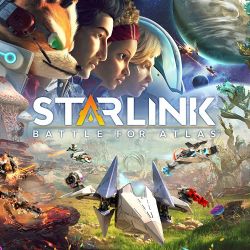 Starlink: Battle for Atlas is an open-world third-person space shooter developed and published by Ubisoft for the PlayStation 4, Xbox One, and Nintendo Switch. The game features a "toys-to-life" mechanic that allows players to customize their ship loadout using physical toys to which players can attach different parts. However, the game can also be played without the toys; all parts obtainable through the toys can also be purchased digitally as DLC, and digital releases of the game have a set of pilots, ships, and weapons bundled in.

The Nintendo Switch version of the game contains exclusive content related to the Star Fox franchise, including Fox McCloud as a playable pilot, his Arwing, and exclusive missions following the Star Fox characters.