Every stage contains six different enemies, except the second which only contains five. After you complete the game once, a new enemy will be introduced on each stage except for the seventh. 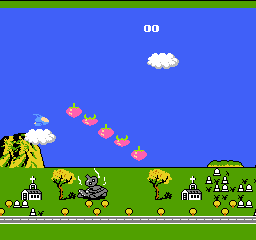 Description: The first stage is a horizontally scrolling stage. Donburi island is the home of Dr. Cinnamon, and is situated in the middle of a calm ocean. Although this stage make appear similar to the pastoral stage in the original Twinbee, you get a new perspective on it due to the change in scroll directions. Each of the enemies are types of food, such as a Popsicle and fish cakes. The enemies aren't too aggressive here, and you should be afforded enough time to collect a flashing blue bell which will provide you with a shield, and a red bell which gives you lasers.

There are a number of bonus and extra life opportunities on this stage. There is an extra life cross immediately in front of the very first tree, which you'll have to move quickly to in order to bomb it and collect the cross in time. Later on, there are two ground targets that both create "?" icons with a gap in between. Bomb the gap to create another cross. And in a very unusual manner, a third cross can be found in the sky, immediately following the very last tree and mountain that appear on the ground at the end of the stage (when the background music changes to the boss fight music). Fly to the top of the screen and bomb the sky.

The boss of stage 1 is a slice of a huge watermelon. The watermelon will move up and down, firing watermelon seeds at you. The seeds spread out as they move across the screen to the left. Stay on the left side of the screen, leading the watermelon a little bit to ensure that your shots hit the center of the face when they reach the boss, and look for gaps between the seeds that you can safely pass through. 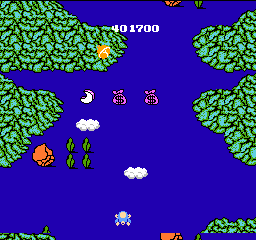 Description: The second stage is the first vertically scrolling stage. The Lamayadora Kingdom is located just off the Indian Ocean. The enemies of this stage are different sorts of underwater creatures, such as turtles and squids. This is another good stage to obtain upgrades from. You will find that bouncing the bell is a little easier in vertical stages, but since you must use the same weapon to bounce the bells and attack the enemies, you may accidentally hit the bell a few more times than you intend. The decision to collect the flashing red bell depends on whether or not you want to obtain the 3-Way and 5-Way shots or not. The 3-Way shot in the middle of this stage can really help, but experts will appreciate the added fire power of ghost options. There are many hidden 1000 point Konami logos to collect throughout the stage, including four lined up along the very end of the stage.

The boss is a huge octopus named Spooky. Spooky stays near the top of the stage and hovers back and forth across the screen. He can summon an unlimited number of legs to defend his body, which eventually turn into harpoons which he shoots down at you before summoning more legs. You can shoot the legs out from under him, but you need to hit his face in order to damage him. While the 3-Way shot can help you out quite a bit, the lasers are actually quite beneficial to have here, since they will hit his legs and continue on to hit his face as well. 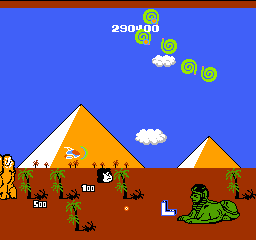 Description: Stage 3 is another horizontally scrolling stage. It takes place in a country in the desert in Egypt. Many famous Egyptian sights such as a pyramid and the sphinx can be seen. The enemies that you encounter here are types of daily necessities, such as a mop and a scrubbing brush. New to this stage is the presence of land targets which will fire at you. They animate slightly just before firing a bullet at your ship. Bomb them and collect the prizes they leave behind before they have a chance to attack you.

The boss of this stage is an angry faucet named Piper. Piper moves up and down along the screen quite quickly. His only weak spot is the opening at the front of the faucet where pink bubbles continue to spew out. Since the opening is his only weak spot, and he moves quite rapidly, 3-Way shots can be quite helpful here, although you'll have to fire quite rapidly to get a bullet past the bubbles and hit Piper's mouth. If you have lasers, stay consistent with his height and make sure you don't move down until the area below you is clear of bubbles. 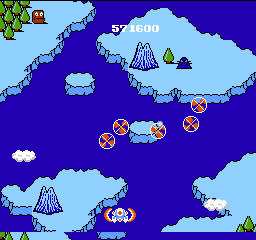 Description: This stage returns to vertical scrolling, and the game will remain so until the final stage. The country of Urarufusuku is found in the arctic cold near the North Pole. The enemies defending it are types of home-electronics, such as television set and a telephone. The 1000 point bonuses become relatively difficult to find from this point forward, but there are a couple of Santa heads to be found, particularly in groups of trees. Focus on regaining upgrades if you've lost any recently. A shield is the hardest upgrade to collect, but its definitely worth the effort.

The boss of this stage is known as Roboga Star, and it appears as a huge robot's head. The head makes minimal movement in the center of the screen, while a chain of spinning discs fly around the head like the hand of a clock. Both the head and the discs are deadly, so you must do your best to avoid them. Stay beneath the head until the disc make it unsafe to remain there. Then fly around the head in the direction of the discs and resume fire when you return underneath. 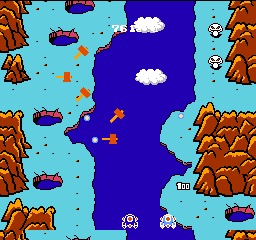 Description: Continuing with the vertically scrolling stages, the next stage takes place over a country in South America. A ravine continues throughout the majority of the stage. The enemies found here are different sporting-goods types, such as volleyball and an bumbell. Enemy attacks become much more aggressive and bullets will fill the air much more frequently. If you haven't picked up too many already, collect a few blue bells to give yourself and edge when dodging enemy fire. Don't collect too many though, or you may find it too hard to control precisely where you want to go.

The boss of this stage looks like a giant stereo, and his name is Sounder. Sounder bounces back and forth near the top of the screen, releasing two sets of three notes at you whenever he stops. The notes then proceed to bounce down to the bottom of the stage, fanning out from the center note of the set. The notes can easily be destroyed by your weapons, but you must hit Sounder in the face to do damage to him and ultimately destroy him. 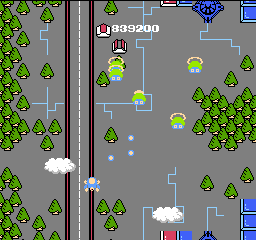 Description: The final vertically scrolling stage takes place over the Ipu=Γ Empire, where mechanical rows of houses sprawl across the surface. This empire straddles across both the atmosphere and outer space. The enemies that you encounter are clearly different types of insect, such as beetles and fireflies. It is in this stage alone that you can collect the rare and powerful 5-Way shot, but only if you do not have ghost option ships following you at the time. The 5-Way Star can be found just as soon as the stage begins. Destroy the first purple ground target that you see near the right to reveal the Star. Note that once you collect it, you will never be offered a blinking red bell, and collecting the L or R items will have no effect, until you lose the 5-Way shot.

The boss of this stage appears to be the very sun itself. This three eyed sun is known as Apollongar. He moves about the screen, protecting himself with smaller green orbs that orbit him. The more orbs he surrounds himself with, the farther out they go, becoming a threat when he is close enough to you that they can spin into the path of your ship. The orbs are easily destroyed by your weapons, but only when they are in front of you, so be prepared to move if they are approaching you from the side. Concentrate the majority of your fire on the face of the sun to destroy him. 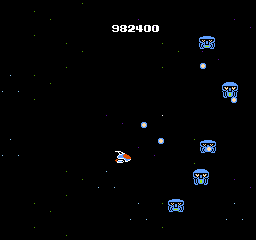 Description: The final stage is a horizontally scrolling stage. Since it is in outer space, there are no clouds to shoot bells out of. Instead, bells are provided to you by the one and only Konami Man, who tosses you a bell whenever he is directly over a ship. The enemies that you encounter on this stage are actually smaller recreations of many of the bosses that you faced in the previous six stages, like watermelon slices and small suns. They are far less dangerous than their original boss counterparts, but no less of a threat than any typical stage enemy, so stay alert. This is the only stage that does not introduce a new enemy the second time that you visit it.

The boss of this stage, and the final boss of the game, is Gatorantisu, a large snake-like creature. Gatorantisu will attempt to devour your ship. He will home in on your position, and chase you all around the screen. Since you can only fire your weapons to the right, you must lure the head as far over to the right, before swinging your ship back to the left. While flying left, fire at the head for as long as you can before having to repeat the maneuver, and lure the head back to the right. As long as you maintain a healthy distance from the head, you are sure to win this final battle, and rescue Dr. Cinnamon.