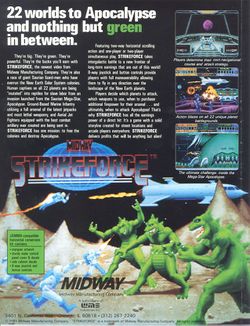 Strike Force is a horizontal scrolling shooter arcade game which was released by Midway Games in 1991; it runs upon the company's Y-Unit hardware, and is passed off as a second sequel to Williams Electronics' Defender (1980) and Stargate (1981). The game's storyline says that Saurian lizard men (who look like male versions of Lizzie, from Midway's own Rampage) have taken over the twenty-two planets which make up the colonies of the "New Earth Solar System", capturing the humans who live on them, and transforming them into reptiles, in order to use them as slaves on their mother ship (the "Mega-star Apocalypse") - and the players must take control of two spaceships (yellow for 1P, purple for 2P) which can transform into turrets and back again (when the Transform Button is pressed), pick up the special weapons which litter the surfaces of the planets and utilise them against their enemies (by pressing the Select Special Weapon and Fire Special Weapon Buttons), and pick up the humans before they are transformed and turn against them (but they can still get saved after transformation).