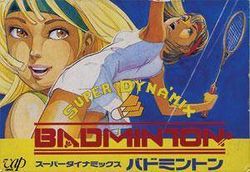 The game is presented from the side, a view more commonly associated with volleyball video games than tennis video games, the latter favoring a viewpoint from behind one of the competitors. This comparison is also true for the sport of badminton itself, which has a similar focus on performing hard-to-counter spike attacks close to the net in order to score points. Because of the irregular flight path of a shuttlecock, the player needs to focus more on its shadow than the projectile itself in order to play effectively.

Though the game has options for both male and female characters every character sprite is the same androgynous black-haired person. The only real change is that games are shorter for female competitors as they would be in real life. The game also allows for four different "coats" on the main menu. This is presumed to be a mistranslation of the word "courts" since these change the venue the competitors are playing in.

The first screen has four options which determine the venue that you will play in. "Coat" is believed to be a mistranslation of "Court". Courts are simply a visual option, and have no impact on gameplay.

Then you choose the style of play. Use

to confirm each choice. The three modes are:

Then you must choose a gender. Oddly, boys and girls look like the same exact character on the court and they play identically as well. The difference is that the Girl match plays to 11 points per game, and the Boys plays to 15.

After you start a new game, you will begin the first match. You can continue from a previously played game by inputting a password.

The final option is picking the country you represent. There are six countries to pick from:

Like gender, the country you choose does not alter your player's skills in any way. Each one plays the same in every match, game and serve.

(Note that the real badminton rules are different, and often change over time. These rules apply for this game only.) 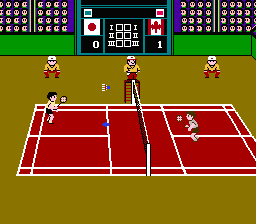 Each game is played up to 15 points for Boys and 11 points for Girls. A player wins a point when they serve, and win the right to serve if they were receiving. A match is the best of three games.