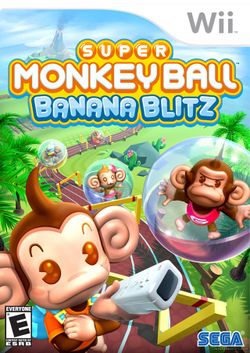 Super Monkey Ball: Banana Blitz is the latest entry in the Super Monkey Ball series following Super Monkey Ball Adventure. It is a Nintendo Wii exclusive and was released as a launch title for the system on November 14, 2006 in North America. The game also introduces a new pirate-like villain, who is the Space Alien Pirate King, previously confused to be Dr. Bad-Boon. He has stolen the eight golden bananas and it's up to AiAi, MeeMee, Baby, GonGon, YanYan, and Doctor to recover the scattered golden bananas.