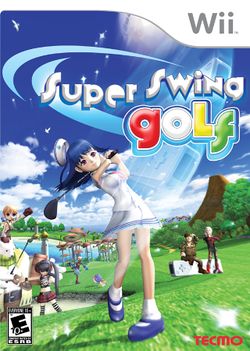 First unveiled at Nintendo's E3 press conference during a montage trailer, Super Swing Golf Pangya was released for the Nintendo Wii game system under the final name Super Swing Golf. The game was jointly developed by Ntreev Soft and Tecmo, and it will be released by HanbitSoft in Korea and Tecmo in Japan.

The game has been built from the ground-up for the Wii. Unlike the computer version, PangYa, the Wii version focuses on its offline single player and multiplayer modes. Each character has their own story arc and will earn gear and apparel throughout the game.