Surround was one of the nine Atari 2600 titles that launched with the system in 1977. Unlike many of Atari's other launch titles, Surround doesn't come packed with a wide variety of similar style games. Instead, it has twelve variations on one particularly good game, and two screen doodle variants. In surround, two players direct blocks around the screen that leave trails behind them wherever they go. Each player's goal is to outlast the other and cause their opponent to crash first.

Surround's premise had been seen several times in the arcade before the Atari 2600 arrived. Gremlin manufactured an arcade game in 1976 named Blockade with identical game play. Atari released a variant of their own called Dominos. But the style of game play was given a high speed computer generated makeover in 1982 as part of the movie Tron, where programs were forced to do battle in the game grid, and one such grid was known as the Light Cycles. The Light Cycles concept remains popular to this day.

Naturally, Surround can't compete with the elegance and flash of Tron's Light Cycles, but it's still a fun game to play. And with four different options and a total of 12 variations, Surround can be tailored to the specific level of challenge that you and an opponent are looking for. Two variations are dedicated for one player games, allowing the player to test their skills against the computer controlled left block. It was released as Chase under the Sears Telegames label.

Each player's block starts out on one side of the screen and begins moving towards the other. The player must direct the block using the joystick. The blocks will continue to move, beyond the player's control, in the last direction that it was instructed to move in. A player earns one point every time his or her opponent crashes into a wall, regardless of who created that wall. When a point is scored, the board is reset, the walls are cleared, and the players are returned to their starting position. The first player to score 10 points wins the game.

Note:Unlike many Atari 2600 games, the first player is intended to use the right side controller, and the second player uses the left side during a two-player game.

Game variations 2 and 4 are reserved for single players. The player must plug his controller into the right side of the system, as the computer controls the block that begins on the left side of the screen. The computer uses a mix of random direction determination and low-level life preservation (the computer will never run into a wall unless there is no other choice.) In some ways this makes the computer easier to defeat than a normal player, and in other ways, it makes the computer harder. The computer will never execute a well thought out plan, but it will preserve itself as good, if not better, than a human player, regardless of speed. The left difficulty switch controls the level of intelligence that the computer uses. Game variation 2 features no special options, while game variation 4 features the Speed Up option. 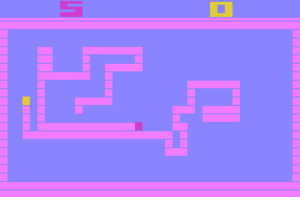 The majority of game variations in Surround feature the Speed Up option. During Speed Up, each player's block accelerates through five different speeds until the speed is maxed up. At top speed, the blocks become very difficult to control, and walls become exceedingly hard to avoid. Speed Up games increase the challenge factor quite a bit, and tend to come to a conclusion much faster than games without Speed Up.

Half of the Surround game variations feature Diagonal movement. This means that players can move their blocks in eight different directions instead of just 4. There is an interesting consequence to moving diagonally. Unlike horizontal or vertical walls, diagonal walls can actually be passed through if your block is aligned properly. If your block is moving diagonally in such a way that does not cause it to line up with an existing diagonal wall, it will jump from one side of the wall to the other, allowing you to continue unharmed.

Game variations 7 and 12 feature the Erase option. Erase allows you to hold the joystick button down to prevent your block from leaving a trail behind you. As soon as the button is released, your block will resume leaving a wall behind wherever it travels. The button can be pressed as frequently as you like. One tactic that Erase players can use is to attempt to cut the opponent off and release the button so that they slam into a newly created wall.

Game variations 8 through 12 feature an open-arena option known as Wrap Around. In these variations, the play field is not enclosed by a wall, and players may venture beyond the boundaries of the screen, only to reappear on the opposite side. For example, if a player pass through the left side of the screen, he will reappear on the right side in the same row. This allows for more complex strategies and a greater likelihood for escape.

If you really want to see who the better surround player is, set the game to variation 12, which features every option including Speed Up, Diagonal Movement, Erase, and Wrap Around. Allow the game to start, and at the beginning of each turn, both player should hold their buttons down to prevent leaving a trail behind. Wander around the screen until the highest (fifth) speed is reached, at which time, both player should let go of their buttons and leave them unpressed until the next round begins.

Game variations 13 and 14 are actually not games, but a simple doodle program that allows players to create any on screen design that they like. Both players can control the blocks to create images and pictures. The blocks will not move forward unless directed by the player. The button can be used not only to prevent the blocks from drawing, but also to erase existing walls. The only difference between the two variations is that 14 allows players to move the blocks diagonally.