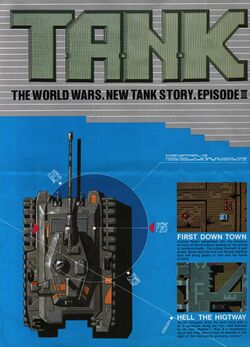 TNK III (titled T.A.N.K. in Japan and on the computer releases) is a 1985 top-view shoot-'em-up arcade game by SNK. The player commands a tank that can fire machine guns and cannons to destroy any opposition en route to the player's destination, passing enemy infantry, missiles, tanks, and gun emplacements on the way. Scattered around the game are power-ups that can be retrieved.

This game features the first appearance of Ralf Jones, (changed to Paul in the international releases) predating his appearance in Ikari Warriors. This game also predates Ikari Warriors in its use of a rotary joystick.

Versions for home computers were released by Ocean Software for the ZX Spectrum, Commodore 64, and Amstrad CPC in 1987. A sequel was also released for the Famicom titled Great Tank (titled Iron Tank for the international release on the NES.) In 2011, this game was recreated for play on the PSP through the PlayStation Network.