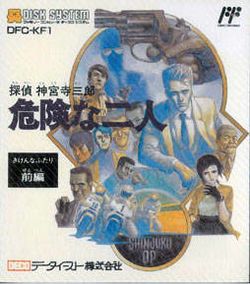 Tantei Jinguuji Saburo: Kiken na Futari (探偵 神宮寺三郎 危険な二人, Tantei Jinguuji Saburo: Kiken na Futari? Detective Saburou Jinguuji: Danger For Two) is a mystery-adventure game developed by Data East for the Famicom Disk System. It is the third game of the long standing Tantei Jinguuji Saburou series, following Tantei Jinguuji Saburou: Yokohama-kou Renzoku Satsujin Jiken. In the third mystery, the detective visits a race circuit at the invitation of one of Yulia's friends. A motorcycle racer, Sabin Olsen, crashes at the circuit, but a different racer's body is recovered from the crash site. At the same time, Sabin Olsen, at a hotel, is found where a man he was supposed to meet was killed causing Olsen to be framed as he fled the hotel. Due to memory constraints on the size of the disks, this game was broken up into two parts. The first part, or Zenpen (前編, Zenpen?) was released in December of 1988, while the second part, or Kouhen (後編, Kouhen?), was release a few months later.