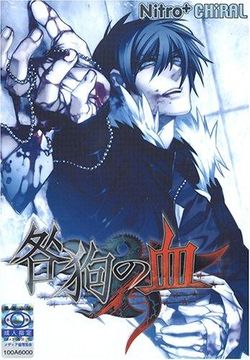 Togainu no Chi (咎狗の血, lit. Blood of the Reprimanded Dog?) is a Japanese BL visual novel created by Nitro+CHiRAL. The plot centers on Akira, a young man who is made to participate in a deadly game called "Igra" (Russian for "game") in post-apocalyptic Japan in exchange for being freed from prison. His goal is to beat "Il Re" (Italian for "The King"), the strongest person in Igra. Although it was only Nitro+CHiRAL's first game as a BL branch, it proved successful, spawning remakes, two manga series, a novel, and a twelve-episode anime series. An English patch by Yaoi Forever was also released, available here.

After being devastated in the third World War (known as The Third Division), Japan was divided in two. Several years after the end of the war, a crime organization called Vischio has taken control of the destroyed city of Toshima (formerly Tokyo, Japan's capital city), where they are holding a battle game known as Igra.

Igra is a battle game held in Toshima that may result in the murder of participants. To participate, one must meet with Arbitro and tell him their reason for their decision. Upon meeting with Arbitro, participants are given five dog tags, each engraved like a card in a standard deck of playing cards. One tag must hang from the participant's neck as proof of participation. Participants must then put their lives on the line to collect others' tags, with the goal being to collect a Royal Flush. If a participant collects a Royal Flush set of tags, they earn the right to challenge "Il Re" in battle. Battles end when one party either dies or lets their back touch the ground. The winner takes the loser's tags and is free to do as they please to the loser after that, often resulting in the loser's death.

The game's main character, a young man named Akira, is falsely accused of a crime. Once arrested, a mysterious woman appears before him, offering him freedom if he agrees to participate in Igra and defeat Igra's strongest man: the king, or Il Re. The story follows Akira's life in the harsh, lawless Toshima as he fights both to survive and to unravel the mysteries developing around him.