This is the first game in the Tomba! series. For other games in the series see the Tomba! category. 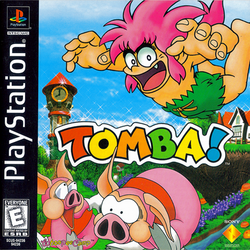 Tomba! (originally Ore Tomba! in Japan and Tombi! in Europe) is a platform game developed by Whoopee Camp for the PlayStation. The game was followed by a sequel titled Tomba! The Wild Adventures in Japan, Tomba! 2: The Evil Swine Return in North America, and Tombi! 2 in Europe. The colorful imaginative atmosphere and innovative gameplay has continued to keep it nostalgically popular with gamers. The series is the brainchild of Tokuro Fujiwara. It was also one of the first PlayStation games to take advantage of the DualShock feature.

Tomba! is set on a group of islands in the middle of an ocean which do not appear on any map. Formed with great provinces in the north and smaller islands in the south, the region is home to peaceful people who lived in tranquility for many years. The island was once a beautiful place, home to birds and plantations. The protagonist is an energetic pink-haired youngster named Tomba (Tombi in Europe). One day, seven evil pigs appeared, and using their magical powers, they mutated the surroundings into a bizarre landscape. The underlings of The Evil Pigs, called the Koma Pigs, stole Tomba's grandfather's bracelet and a substantial amount of gold through a strange lust for it.

Tomba's quest is to fetch his bracelet, which requires trapping the Evil Pigs along the way. Trapping them involves finding the Evil Pig Bags, which are keys to entering each realm of each Evil Pig. He must also complete missions for other people to get items and the Evil Pig Bags. Some side-missions are purely for fun and irrelevant to the main storyline.