Tsuppari Oozumou (つっぱり大相撲, lit. Bumping Sumo?) is the first game in a very small series of Sumo Wrestling simulations developed by Tecmo. It was first created for the Famicom and published in 1987. In the game, you create your own sumo wrestler, and then train him and compete with him through several tournaments on a quest to achieve the rank of Yokozuna, or Sumo Grand Champion. The game was only published in Japan, and has never been translated into other languages. It was remade with better graphics for the PC Engine as Tsuppari Oozumou: Heisei Ban. In 2007, it was released as a Virtual Console title for the Wii.

From the title screen, you can select from three options:

When you begin a new game, you give your sumo wrestler a name and he begins the game with the lowest rank. Your goal is to compete against higher ranking sumo wrestlers and rise up in rank until you earn the highest rank of yokozuna. 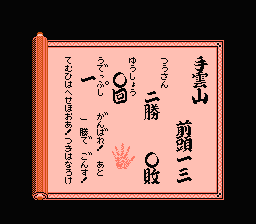 Just before the match begins, you can press

to see the status of your wrestler. From right to left, the following information is provided:

Tournaments progress from one match to the next. If you ever increase your level, you are shown eating and preparing for the next match. After an entire tournament has been completed, you are shown your new rank.

If you want to take a break from the game, you can call up the status screen before the next match and jot down your password. Then when you return to the game, select continue and input that password to pick up where you left off.

You can compete against a friend by choosing the Battle option. In this mode, you must each choose from among four stables of sumo wrestlers. Then you select one fighter from each stable to compete. The loser's sumo is knocked out of competition and the tournament continues until one player has no more wrestlers to compete with.

Once the charge is finished, each wrestler must try to use their strength to force the other wrestler off his feet or out of the ring. When the wrestlers are close to one another, these are the different commands you can try.

If you or your opponent successfully push off one another, you will be momentarily separated. While you stand apart, you can also perform the following moves.

Special finishing moves are also available by performing certain actions at the right time. They are generally available to you when your health meter is flashing.