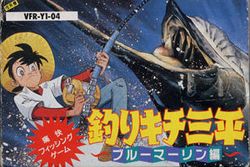 The series is about a boy who discovers that he has a talent and a huge passion for fishing, and tries to maximize his potential by entering into different fishing contests. He encounters all kinds of rivals and companions who help him increase his skill. As he faces various challenges, he learns to solve difficult problems and learns from his mistakes to the extent that he is able to fish anything out of the water.

In the game, Sanpei is competing for the top prize in the "1988 Famicom International Billfish Tournament" by capturing the largest Blue Marlin possible. The game was never released outside of Japan, or translated from Japanese.