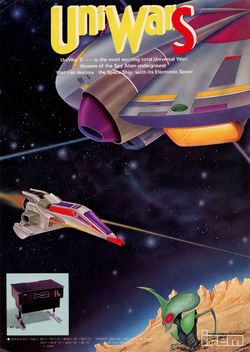 Gingateikoku no Gyakushū (銀河帝国の逆襲), released as UniWar S in the United States is a fixed shooter arcade game that was released by Irem in 1980; it runs upon Namco's Galaxian hardware (a Zilog Z80 running at 3.072 MHz). The player must use the two-way joystick to direct a yellow ship left and right (across the bottom of the screen), with a single button to make it fire shots up at the various types of enemies - and the first stage will see it fighting a formation of "Super Mosquitoes", which are worth 20 points apiece. The second stage, which sees a dotted orange line under the ship, will see it fighting a formation of "Hovering Attackers" which are worth 30 points apiece, and the third stage will see it fighting a formation of "Demon Flies", which are worth 40; some of the "Demon Flies" will leave "Spy Aliens" when killed, which will fall down to the bottom of the screen underneath that line, and try to stab the ship from behind. The only way to kill them (for 100 points apiece), is to destroy the "Killer King" when he appears - and the fourth and last unique stage will see the ship fighting a formation of "Rolling Fires", which are worth 50 points apiece and will also occasionally leave "Spy Aliens" behind when killed. After the last unique stage has been cleared, the four-stage cycle will start all over again.