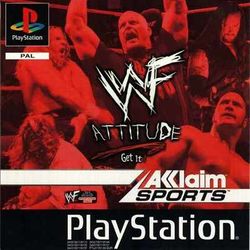 WWF Attitude is a professional wrestling video game based on the World Wrestling Federation (now WWE) released by Acclaim Entertainment in July 1999 for the PlayStation and Nintendo 64. A slightly enhanced port of the game was later released for the Dreamcast, as well as a handheld version for the Game Boy Color. The game is named after the slogan of WWF's marketing campaign at that time with the tagline "Get it!"

The game is the sequel to WWF War Zone and is the last WWF game to be published by Acclaim. The WWF would unexpectedly defect to THQ in 1999, ending its lengthy relationship with Acclaim. The game publisher followed Attitude with two sequels based on Extreme Championship Wrestling (ECW Hardcore Revolution and ECW Anarchy Rulz).