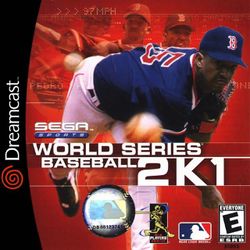 World Series Baseball 2K1 featured a cutting-edge graphical presentation adapted from the NAOMI game Super Major League, and its visuals were well ahead of any other baseball game at the time. Unfortunately, a lack of features, shoddy audio presentation, and major gameplay flaws meant that WSB2K1 was not well received by critics despite its fantastic graphics. The game is notorious for its sometimes-unresponsive controls, as well as the fact that manual fielding—a staple of baseball games for a half-decade prior to WSB2K1's release—isn't even an option available to players.