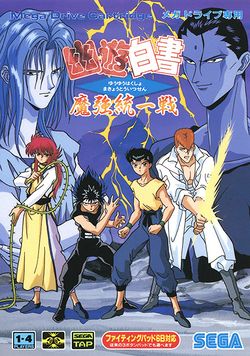 The game features 11 playable characters from the manga and traditional 2D fighting gameplay. Opponents compete in rounds, attempting to deplete each other's health by utilizing short and long-range attacks and special combos. It also integrates other mechanics, such as allowing up to four players to compete simultaneously and letting fighters alternate between horizontal planes in the foreground and background. A number of multiplayer options are available that include battle royales, tag team matches, and tournament modes.

The game was licensed by Tec Toy, translated into Portuguese, and released in Brazil in 1999 as Yu Yu Hakusho: Sunset Fighters. It was also included in the Japanese Mega Drive Mini, which displays its name as Yu Yu Hakusho: Battle to Unite the Demon Plane when the console is set to English.