You control the Super Ace Lockheed P-38 Lightning, with its distinctive twin booms with forward-mounted engines and a single, central nacelle containing the pilot and armament. It's a very maneuverable craft as you're about to discover. Though small, it contains all the fire power you need to take on the entire Japanese Air Defense fleet. It starts out each mission taking off from the deck of a U.S. aircraft carrier. It possesses a twin guns that fire upward, ahead of the plane's flight, and they can be expanded to quad guns. It also possesses a limited capability of performing vertical 360 degree loops through the air, making it impervious to enemy fire and contact while performing. For all of its strengths, it only takes one hit from the enemy to bring the Super Ace down. For all of your offensive prowess, you must constantly shift your position in the air so as to avoid taking enemy fire, or direct collisions with their craft.

The collision box for the Super Ace covers the plane. While bullets may safely clip the forward wings without problem, a hit anywhere closer on the plane will destroy it. As a reference, you can use the framing and propellers to visualize the hitbox.

The small enemy air craft make up the vast majority of the fighter planes that you will encounter. Although they have slightly different motions from one another, their general behavior is the same: Enter the scene, take a shot or two at you, and escape with their lives anyway they can. The pilots of these crafts have no fear of flying into you either. They will continue on their route whether you get in their way or not, and if you do, that's one chance less that you will get to complete your mission. Generally, Gray planes generally appear at the top of the screen while green planes appear from the sides.

Single propeller planes have two different behaviors. Planes that arrive from the side will circle randomly before leaving. The planes approach from the top still have two variations. If the gray planes come in at an angle, they will flip back, and sometimes may return for a second pass at your airplane. If they come in straight, they will turn towards you.

Do your best to track the position of each aircraft on the screen, but be more concerned with the bullets that they shoot. Shoot down those that you can with safety and dodge any others that would pull you into danger.

Mid sized enemies appear far less frequently than smaller enemies, but the stretches of time between their appearance tend to be short. In the beginning of the game, they will appear from the top of the screen, loop around once, and continue down. After a while, they will begin appearing exclusively from the bottom of the screen. Shortly after that, they will begin to appear in randomized packs. For this reason, it is not safe to remain at the bottom of the screen, since you can not tell where they will appear from. The gray planes are more resilient to your shots and travel slightly faster than the green ones. Towards the end of the game, the planes will occasionally appear in a screen-wide formation that will require you to move to one side or the other in order to get behind them safely. They take a number of shots to destroy and earn you 1000 or 1500 points.

Even if you don't kill such enemies, you still get 100 points for each hit you land on them. 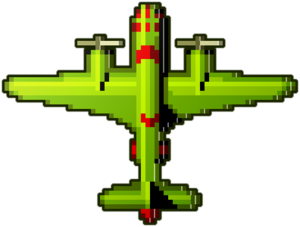 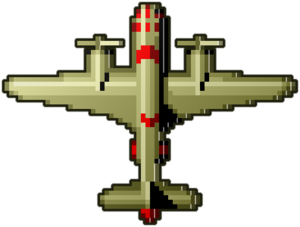 These planes are the largest regular enemy that you will face, and their defense is formidable. They will always fly on to the screen from the bottom, and move towards the top of the screen. Eventually they stop advancing and begin moving back and forth in a pattern while showering you with bullets. They take a high number of shots to fully destroy. The first time you defeat one, you will earn 2000 points. Every time you defeat another plane, the point value awarded increases by 500 points, up to a maximum of 9000 points. As with the medium planes, the gray version has more thresholds and advances faster than the green version. The gray version also shoots out more bullets in more directions than the green version. Take them out as quickly as possible, without exposing the Super Ace to dangers presented by the smaller planes.

Initially, they shoot three bullets spread out. As the game progresses, the number of shots in a volley increases.

As with the medium enemy, you get 100 points for each hit. 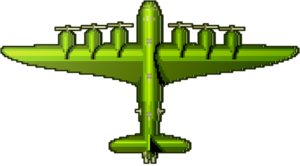 You will face exactly four boss planes throughout the 32 stages of 1942. They will appear when you have 26, 18, 10, and 2 stages remaining (the stages in 1942 count down). The first three are green, while the final boss that appears is gray. This plane, named the Ayako, is based on the Japanese Nakajima G8N bomber used by the Imperial Japanese Navy. The green planes spray bullets into the air in waves. A general strategy to employ is to fire at the plane as frequently as possible, and prepare to use one of your loop maneuvers when the bullet spray begins. If it is apparent that avoiding every bullet is impossible, execute a loop and avoid all of the bullets entirely, then immediately resume shooting. They gray plane shoots more regularly, so the loop maneuver can't be as precisely timed. The boss plane is a very wide target and easy to hit from nearly every position on the screen, so focus more on the Super Ace's position and dodge the bullets while constantly firing back at the boss. Until you defeat the Ayako, you cannot advance to the next stage. The first boss is worth 20,000 points, and each boss's point value increases by 10,000 points (the final boss is worth 50,000).

At certain intervals in every stage, a formation of red planes will fly out. If you manage to destroy every single red plane in the formation, the last plane will reveal a POW symbol. The power-up granted by the POW symbol is determined by the stage and the color of the symbol. Each stage has a particular unique power-up that you can collect (with the exception of extra life stages which has a secondary power-up to collect.) If you already possess the power-up that you can earn on that stage, you will earn the 1000 point POW symbol instead.

The Yashichi (矢七, which translates to "seven arrows") is a mainstay in nearly every early Capcom game, and even some later ones. It can be revealed by shooting down a small green plane that appears in one of the lower corners, and advances up to the top of the screen. If you shoot it down, it will spin around until it explodes, leaving the Yashichi behind. Collect it to earn 5000 bonus points.