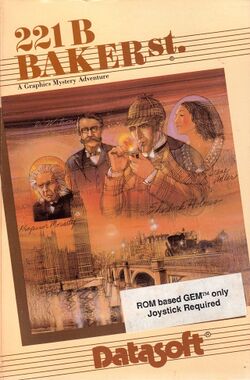 221 B Baker St. (a.k.a. 221B Baker Street), is a 1987 board game, self described as a "Graphics Mystery Adventure," based on a tabletop board game of the same name. The game was inspired by the exploits of Arthur Conan Doyle's fictional detective Sherlock Holmes and derives its title from the detective's residence at 221B Baker Street in London.

It was developed by Pacific Softech and released by Datasoft in the U.S. in 1987 for the Apple II, Atari 8-bit family, Atari ST, Commodore 64, and MS-DOS.

Up to four players compete against each other to solve various mysteries in and around Victorian London.